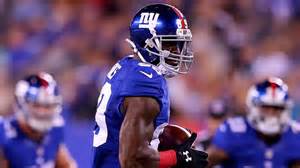 The Giants announced that they’ve placed DE Owa Odighizuwa on injured reserve with the designation to return. The Giants also signed CB Dax Swanson to their practice squad. This move will keep Odighizuwa out of the lineup until Week 17.

Congratulations to my client and friend @J_Cunningham89 for getting back on the #Giants 53. Your hard work has paid off again!!

Owa Odighizuwa was drafted by the Giants in the third round of the 2015 NFL Draft. He played college football at UCLA.