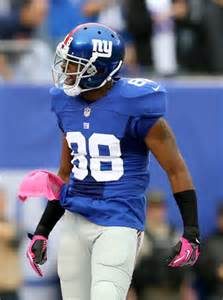 Hakeem Nicks is back with the Giants

Mike Garafolo of FOX Sports reports that the Giants are signing WR Hakeem Nicks to a contract on Tuesday and placing WR Victor Cruz on season-ending injured reserve.

Nicks had 56 catches for 896 yards and zero touchdowns for the Giants in 2013, and the Giants did not re-sign him after that year. Nicks caught just 38 passes for 405 yards and four touchdowns last season after signing a one-year deal with the Indianapolis Colts.

He spent training camp this year with the Tennessee Titans but was among the final cuts and has worked out for several teams since.

Nicks, 27, signed a one-year contract with $100,000 guaranteed with the Titans back in April. However, he was among the team’s final roster cuts this past weekend as they got down to 53 players.