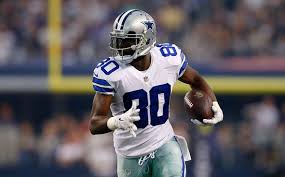 LaRon Byrd was released by the Falcons

Goodwin was signed as an undrafted free agent to the Steelers after going undrafted in the 2014 NFL Draft. He played college football at California University of Pennsylvania.

After going undrafted in the 2012 NFL Draft, Byrd was signed by the Arizona Cardinals in 2012. He has also been a member of the Dallas Cowboys, Cleveland Browns and Miami Dolphins. He played college football for the University of Miami.