Do the Cleveland Browns have Pierre Desir on the trade block? 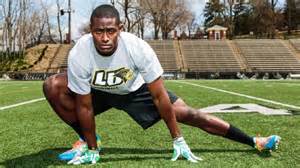 Do the Cleveland Browns have Pierre Desir on the trade block?

Today is the NFL trade deadline, and while tons of Browns players are currently being shopped, is there another player not being mentioned? Players like Barkevious Mingo, Joe Thomas, Alex Mack, Dwayne Bowe and Paul Kruger have all been mentioned by beat reporters about potential trades, but did the team tip their hand about another player?

One player that has not been mentioned is Pierre Desir, the former Lindenwood standout cornerback.  I do not know if the Browns are trading him or not, but they sure are doing some strange things with him.

Two weeks ago in St. Louis, Desir started for the injured Joe Haden, and played pretty well.  Desir is a tall corner at 6’1 had scouts raving over him coming out of college because of his ability to track down a ball.

In his young career, Desir has been a solid cover cornerback, shutting down Kelvin Benjamin in his rookie year, and playing pretty well as a second year player.

This week, the Browns were down another corner after Joe Haden went down with a concussion, the team played Johnson Bademosi a (Special Teams player) in his spot.

This was a mind blowing move, since Desir has been labeled as the third corner on the Browns behind Joe Haden and Tramon Williams for several weeks now.

The Caridnals have big wide outs, who Desir matches up well against, but he only played one snap.  So that brings me to the next question, is Pierre Desir on the trade block?

You cannot trade an injured player, so did the Browns sit him to see if they can land a draft pick from cornerback needy teams?  The team has K’Waun Williams who is returning and also have Joe Haden, Justin Gilbert and Tramon Williams.

I am just throwing it out there, I have zero proof to this theory. Just trying to figure out why a team would sit Desir when they could have used him over a special teamer, who never played cornerback in a game.

If they were just benching him, they are not smart, and maybe the secondary coach should be examined, because the Browns are so close to winning every week but cannot find a way to pull it off.  Just imagine #26 on the Patriots?  Just sayin…..