Could Nick Saban be the next guy in charge of Andrew Luck and the Colts? 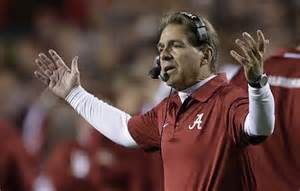 Could the Colts target Nick Saban as their next head coach/GM?

Colts could have some big changes in the near future, especially if Chuck Pagano cannot get the Colts on the right track.  In and interview with Mad Dog Sports Radio, Bob Kravitz a beat writer told them that owner Jim Irsay doesn’t believe HC Chuck Pagano “is the guy who can take him to where he wants to go.”

“Jim Irsay does not believe that Chuck Pagano is the guy who can take him to where he wants to go,” Kravitz said. “He’s talking about not just one Super Bowl, but multiple Super Bowls in the Andrew Luck era.”

According to Kravitz, Irsay will make the next coaching hire, which could ultimately be Alabama HC Nick Saban.