Chargers worked out more than 10 players; Including Steve Weatherford 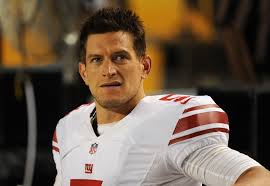 Weatherford, 32, originally signed on with the Saints as an undrafted free agent out of back in 2006. Since then, he played briefly for the Chiefs, Jaguars, and Jets before finding a home with the Giants in July of 2011. Weatherford was on the Jets roster a couple weeks ago when Ryan Quigley could not go because of an injury. The team did release Jacoby Jones, but they did not sign any of the people in for a work-out.