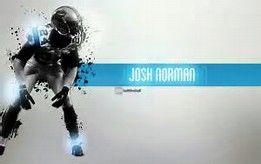 Josh Norman is in line for a huge pay day, and a Hall of Famer is saying Pay the Man

Just two years ago Ron Rivera had Josh Norman in his dog house. He was sitting him on the bench in favor of players that are not better than him, and that lit a fire under Josh Norman. Norman has always had the skills of being a great corner.  Many had him rated as a top tier cornerback and he fell on draft day. That surely made him upset, because Norman is such a confident player.  Well this year Norman is the best cornerback in the NFL according to Pro Football Focus.  It is not even close, and he is getting national attention.

He is not the third best cornerback on the Seahawks, like Byron Maxwell, and he is not 30 years old like Darrelle Revis, and he does not just cover one side of the field like Richard Sherman. Norman covers the best wide receivers on the other team and shuts them down.  That is why Champ Bailey the legendary Pro Bowl cornerback is telling the world that Norman should be the highest paid cornerback in the game.

“No doubt,” Bailey said when asked if Norman deserved a big payday. “If it just started this year, then I’d be reluctant, I’d say show me more. But this goes back into last year.

“You see that from a player sometimes. A light just goes on and it’s like damn, this is what it takes,” Bailey said. “He’s excelling because he has a lot of confidence, he’s playing within the scheme and he’s understanding football.”

Those aren’t the only reasons for Norman’s rise, of course.

“His instincts are ridiculous,” Bailey added. “You don’t play Cover 3 and then jump routes like he does. You don’t just do that without film study or without confidence.

I agree with Champ…. #PAYTHEMAN