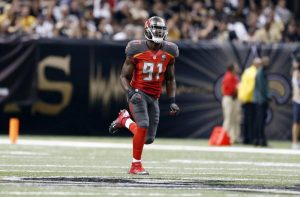 Buccaneers have claimed linebacker Kourtnei Brown off the waiver wire

Brown had been cut by six teams before making his NFL debut for the Bucs in September, and was then cut after only one game. He’s been on roster with the Texans for the past six games, though he was only active for one of the six games, playing primarily on special teams.

To make room, the Buccaneers waived defensive end Lawrence Sidbury, who played Sunday but had no tackles in six defensive snaps.