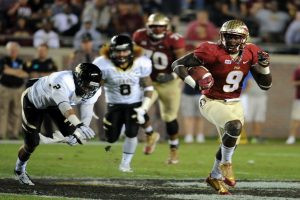 The Buffalo Bills may have a steal in Karlos Williams. The fifth rounder from Florida State has a nose for the endzone. Last night the former Seminole running back tied an NFL record with his 26-yard touchdown catch from Tyrod Taylor against the Jets.

It was the sixth straight game Williams has score a touchdown to begin his career, which matches the record set by former New England Patriots running back Robert Edwards in 1998.

When the Buffalo Bills drafted Karlos Williams many (including myself) were scratching their heads.  They couldn’t understand how you have Bryce Brown, Boobie Dixon, Fred Jackson and LeSean McCoy and still draft a running back.  Well that changed for us all, because Williams is a stud and playing at a very high level right now. When the Bills are running the ball effectively they are tough to beat. Shady is elusive and Karlos Williams is a bruiser.  If the Bills want to continue to win they will need to run the ball effectively going forward.