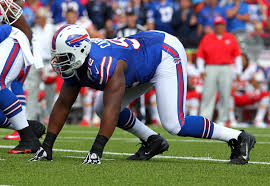 Alex Carrington is done for the year with a torn quad

The Buffalo Bills are paper thin at the linebacker position, and today they released one. According to Ian Rapoport of NFL Media, the Buffalo Bills released linebacker A.J. Tarpley. Tarpley was signed as an undrafted free agent from Stanford and made the 53 man roster.

The Bills also placed defensive end Alex Carrington on the injured reserve ending his season. Rapoport reports that the former Arkansas State defensive end tore his quad tendon and underwent surgery. The Bills have holes on their roster and practice squad, I would expect some signings tomorrow.

#Bills sudden starter at DE Alex Carrington tore his quad tendon yesterday and will have surgery today, I’m told. Out for the season.