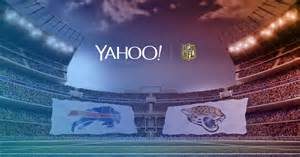 Yahoo! struck it big with the NFL yesterday, as 33.6 million people viewed their stream of the Bills v. Jaguars

Yesterday the best game of the day had to be the Jaguars versus the Buffalo Bills.  The game was a slobberknocker that eventually turned into a very good game.  The Jaguars were up at one point 27-3, but the Bills rallied back taking the lead with just under 3 minutes left. The Jaguars displayed a nice final drive to get the win 34-31 across the pond. Well today the results of the contest have came out and over 33.6 million people in the world tuned in.

“It’s been a great opportunity to partner with the NFL and deliver a truly exceptional global live streaming experience for our users,” said Adam Cahan, Yahoo’s SVP of Product and Engineering, said in a release. “We’re seeing a dramatic shift in the industry as audiences’ primary video watching moves away from TV. We were thrilled to join the NFL in setting a new standard for sports programming for our users and advertisers.”

The NFL is sure to love the reach as 33 percent of the streams were from international users across 185 countries worldwide.

“We’re a lot closer to the internet being a real, legitimate distribution platform for NFL games than we were one or two years ago,” NFL executive vice president of media Brian Rolapp told The MMQB’s Peter King.

“We’re thrilled with the results of our initial step distributing an NFL game to a worldwide audience and with the work of our partner, Yahoo,” said Hans Schroeder, Senior Vice President, Media Strategy, Business Development & Sales for the NFL. “We are incredibly excited by the fact that we took a game that would have been viewed by a relatively limited television audience in the United States and by distributing it digitally were able to attract a global audience of over 15 million viewers.”

This is pretty big, considering the NFL is becoming more global with this activity. I would not be shocked if more games are streamed online soon.