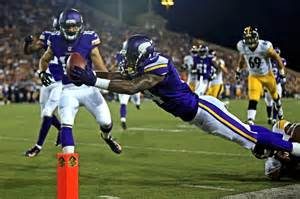 Vikings wide out Stefon Diggs has been impressing his teammates

Mike Walace has bounced around the league over the past several years, and now that he is on the Vikings roster, the former Ole Miss wide out is really impressed with his newest teammate Stefon Diggs.  A matter of fact, Wallace compared his new teammate to a former teammate. Wallace and Antonio Brown were teammates in Pittsburgh in the beginning of their careers. The Steelers drafted Brown in the sixth round of the 2010 draft. Though Brown had a limited impact during his rookie campaign, he had a strong second season — during which he racked up 1,108 receiving yards.

Diggs also was a late-round selection. Despite the similarities between their paths to the NFL, it’s Diggs’ skill set on the field that reminds Wallace of his former teammate.

“You can tell from Day One who can play football or not,” Wallace said, per Matt Vensel of The Star Tribune. “They have some exceptions where guys get better drastically over time. But for the most part, you can tell from Day One, can he play or can he not play? And I always felt like (Diggs) could from Day One. … Just the skill set, the way he runs his routes, the energy that he has. It reminds me of (Brown).”

If Diggs turns into an Antonio Brown-like player, the Vikings found themselves a steal.