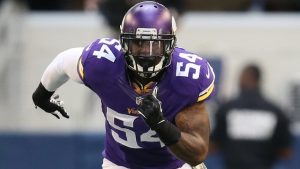 On Tuesday, the 49ers acquired the third-year linebacker from the Minnesota Vikings in exchange for center Nick Easton and an undisclosed draft choice.

Hodges, 24, has 20 tackles in three starts for the Vikings this season. He recorded eight tackles in Minnesota’s Week 1 loss to San Francisco.

Hodges was a fourth-round selection by the Vikings in the 2013 NFL Draft out of Penn State.