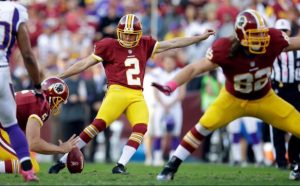 Saints have a new kicker, and his name is Kai Forbath

The New Orleans Saints were busy on Monday looking for a kicker, and they took no time signing one. The team released kicker Zach Hocker and signed former Redskins kicker Kai Forbath.

Mike Garafolo reports that the Saints are signing K Kai Forbath to replace Zach Hocker, who is being placed on waivers.

Forbath, 28, originally signed on with the Cowboys as an undrafted free agent out of back in 2011. He lasted a around eight months with the team before he was placed on waivers and later claimed by the Redskins. Forbath worked out for the Saints a few weeks ago.