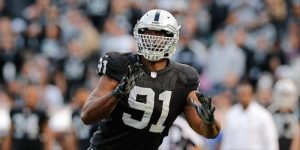 Tuck played college football at Notre Dame, and was drafted by the New York Giants in the third round of the 2005 NFL Draft.Tuck signed a two-year, $11 million contract with the Oakland Raiders. Tuck said he signed the deal because the deal that the New York Giants offered was “disrespectful.”