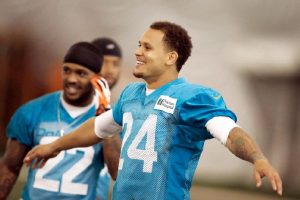 Rand Getlin of NFL Media reports that the Patriots worked out veteran CB Cortland Finnegan on Wednesday. Getlin adds that while the Patriots did not sign him to a contract, Finnegan will be worth monitoring in the coming weeks.

This is the first reported interest in Finnegan since he decided to unretire and pursue another opportunity in the NFL.

Cortland played college football at Samford, and was drafted by the Tennessee Titans in the seventh round of the 2006 NFL Draft. Finnegan also played for the St. Louis Rams and Miami Dolphins.