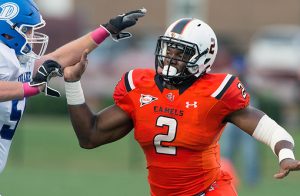 The coolest thing I’ve ever done off the field was visiting a nearby elementary school to play various games with the special need kids.

My role model has to be my father, he been with me through the ups and downs and also helped me out a lot in school and football.

I feel like I can definitely shed blocks well and set the edge good.

When breaking down I look to see how athletic, or in the run game is he physical and stay on blocks well. Is he patient with the hands, are they high or low? His reaction to different pass rush moves. 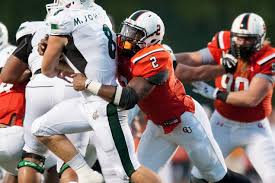 The tackle from App St. He had very good footwork and was aggressive . It definitely was a good competition and got me better.

I would go to a quiet spot in the field house and vision the plays I would make and relax.

The obstacles you would have to overcome are proving you can play with Big school guys. You have to dominate your competition of play since we’re from a smaller school.

Being able to take criticism better