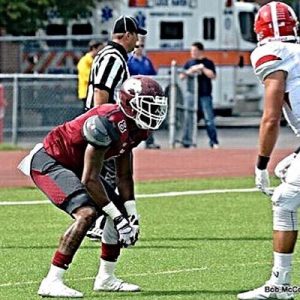 Tyrai Anderson of Lock Haven is a solid press corner

My hardest college course would probably haft to be ballet.

My role model would be Chris “Handles” Franklin of the Harlem Globetrotters. The reason why is because he brought me under his wing and guide me through life as a young boy and as I grew into a man he was able to inspire me to always pursue my dreams because of the great heights he has been able to reach in his life and career. I’m thankful for his guidance.

Basketball,baseball and track and field  I excelled in all football is just my first love.

When I first started playing football around age 6 I played Running back and line backer and when I got to high school I played WR and Corner.

I think that I have a great work ethic that allows me to always better myself, I’m never complacent because I understand what I want to get out of this game so I’m always working on my craft especially my feet and ability to evaluate film effectively I’m a student of the game.

First I try to watch full games just to try and get a feel of what a offense likes to do I start to pick up on rhythms and tendencies. After I understand those things I look specifically at formations from least to favorite, percentages etc. finally I look for WR tendencies, route running ability,blocking skill and also QB tendencies to help me get a edge on what he’s thinking. This all allows me to anticipate and react faster on game day.

Trevor Hartman currently with the Arizona Cardinals, he was a great competitor always fun to compete with.

Kevin Johnson out of Wake Forest currently with the Texans. We both have similar built body’s and I think that we both play very well when placed in the field we both cover field well also just like Kevin when asked to step up in the face of WR I’m able to shut WRs down. Also he’s good in the open field tackling I think I’m a very good open field tackler as well.

I’m a father two beautiful boys Kameron and Karson my boys have been my inspiration. It was initially hard to figure out how to balance fatherhood,football and school but with the help of my girlfriend and family I have been able to take care of my responsibilities and I’m on pace and scheduled to graduate this December,I thank my boys for that everyday with my grind out on that field. 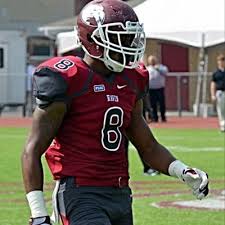 Me and our boundary corner Daniel Strawbridge like to wake up in the morning of a game with attitudes we convince ourselves that the best WR on the opposing team has a personal problem with us that way during the game we make it our business to lock them down.

I think that I just haft to get the chance to actually show that I am capable of playing with WRs that are on the Radar WRs from big names schools. I think that once I play in these all star games and Bowl games with more division 1 WRs  Scouts will see I am able to produce and make plays. I’m just waiting on the chance to get on the same field as those guys and prove I can still dominate the man on the other side of the ball.

I think that I have great field awareness and when you combine that with my athletic ability I’m able to make the plays that I’m supposed to make.

I think that my biggest weakness rite now is the fact I haven’t been able to play many division 1 schools however I think that the times when I was able to play larger name schools I stood I rose up to the occasion and proved that I’m able to play with the best.

Honestly I think that by picking me up your getting yourself a man who has the skills necessary and work ethic to play in the NFL,I am willing to play any role on the team to help my team win.

My favorite player was Charles Woodson and my favor team was the Raiders.

I would buy a house and make sure my boys have a comfortable place to call home.