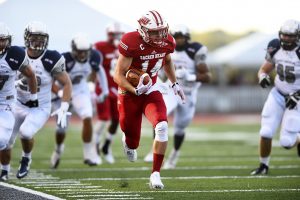 I helped run a clinic for younger kids. I was able to teach these kids about the basics of the wide receiver position.

Who is your role model and why?

My role model is my Father. He has done everything he had to do to provide for my family as well as make it to all of my games even when I was younger

I played basketball and baseball

I played Safety in High School

I look for press techniques, tendencies in different coverages, and get an understanding of how my opponent will react to different routes

The best player I have faced was Ian Williams. He was the best all-around corner I played against in my college career.

I would compare myself to Jordy Nelson. He doesn’t have game-breaking speed, but he always ends up behind the defense. He also has great body control and awareness that makes him a great receiver in the NFL.

My biggest obstacle is my physical appearance. I am not the biggest, fastest or strongest receiver. I believe that I have the intangibles that other receivers don’t have. 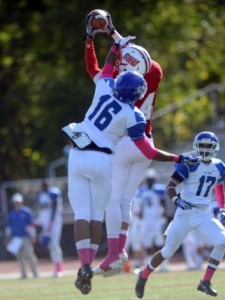 I don’t have any pre-game rituals. I don’t really believe in that stuff.

The biggest obstacle is that there is a belief that the level of competition from FBS to FCS is so different. There can’t be a comparison between the two divisions, however, I believe that there are FCS players that could start for some FBS teams.

My biggest strength is my football IQ.

My biggest weakness is my speed

I am a versatile player that can play any receiver position. I understand the concepts of entire plays instead of just memorizing them. I will be able to help this team win by putting me in any situation the team needs.

My favorite player growing up was Randy Moss

I would have dinner with my Grandfather, Steve Jobs, and Michael Jordan

I would pay off as much of my student loans as I can.