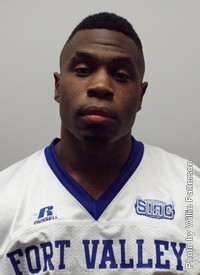 I did Community Service with the youth back at my high school.

My Father is my role model because he made sacrifices for us and taught us many things to become successful and to be a better man in life.

I played Running back.

I Love to play press Man to Man coverage. Many players don’t like to play press man to man because that consist of many things like being patient, eyes in the right place, and good foot work. Another thing that separates me from others is that I can play every position at DB.

Derrick Washington I believe that was his name, but it was my sophomore year he played running back for Tuskegee.

I had a lot of obstacles I had to overcome in my life but the one I can think of is me going into my senior year last year and founding out I couldn’t play because I was Ineligible so I had to sit out an year. That situation made me a lot hungrier but I took that time to work on my craft, get faster, and get stronger.

Yes I listen to R&B music.

I feel like you have to dominate this level, look good on film, have stats, and show out on your pro day.

Press man to man coverage and being a playmaker.

Not being A vocal leader.

“ I Love this game and I will not be outworked”

Buy my mom a house