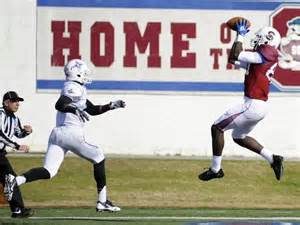 My name is Temarrick Hemingway

One of the coolest things I’ve done off the field is that I actually went back to home and spoke to the girls’ basketball team of Loris Middle School about the importance of high school education as well as college education.

I was born in Loris, SC and raised in North Myrtle Beach, SC.

My role model is Calvin Johnson because he is a respectable individual on and off the field who doesn’t cause any problems, and he excels on the field as extremely well.

Growing up, I did play football as well as basketball.

In high school, I actually played WR, DE, LB, and also was a FS for one game as well.

What separates me from others at my position is my speed and versatility.

When breaking down film, I look for the tendencies of the defense, the most common coverages, and also the type of athletes I will be facing as well.

The toughest player I have faced personally would be Vic Beasley. If I could compare my play to one player in the NFL

it would be Larry Donnell because of his ability to catch and also gain yards after catch as well.

The death of my great grandma was the biggest obstacle I had to overcome since I spent a lot of my time with her and keeping in mind of what she wanted for me as an individual gave me the will and drive to work even harder to obtain what I really wanted out of life.

Before the game, I usually just listen to music, visualize myself making huge plays for my team, and praying before I step out on the field. 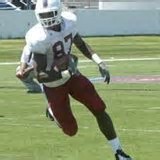 My biggest weakness is only being 240 pounds as a tight end.

If you were a GM, I would tell you how I am a determined, hard working individual who has the will to win as much as I possibly can, and that I will take every opportunity given to me and make the best out of them.

Growing up as a child, my favorite player was Michael Vick.

If I could have dinner with the individuals, I would choose Oprah Winfrey, Floyd Mayweather, and Barack Obama.

With my first paycheck, I would take my family out to eat for always supporting me and being there whenever I needed them to be there.