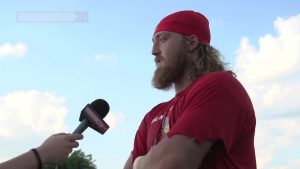 Illinois State defensive end Teddy Corwin is a very humble and fierce competitor. He is a mirror image of Jared Allen in college

Helping out with the Illinois special Olympics for two years

Both of my parents because they showed me what hard work looks like, and showed me how to keep pushing even when times are hard.

Basketball, baseball, and a little bit of soccer

My physicality, my relentlessness, my play making abilities, and being able to stop the run and also rush the passer.

I’m looking for tendencies by the offense. The offensive lines pass sets, where the line looks pre snap, and hints they might give away such as being light on their hand for pass or heavy on their hand on run.

David Johnson from Northern Iowa whose on the Cardinals now, or Carson Wentz from North Dakota State

Jared Allen because we have similar styles of play in being able to rush the passer and makes plays in the run game as well.

Not being recruited heavily by any big time programs, I overcame it by working hard and making it a point to prove wrong all those programs who passed me up 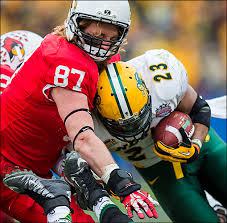 Not really, listening to music and going through my own stretch routine out on the field before we stretch as a team.

The stereotypes people think of a small school program, not playing the best competition but our school is in the top conference at our division so we are playing top competition even though we aren’t a FBS program,

I am a playmaker, I can rush the passer & stop the run, and I use my physicality to my advantage in order to be a force on defense.

I can play defense, offense, and make an impact on special teams, coming from a small school I will always work hard and always have a chip on my shoulder wherever I end up.