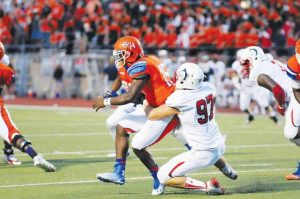 I moved around a lot as a kid because of the military, So it’s hard to say I’m really from one place. But I lived in Virginia and Colorado the Longest

My dad is my role model. Ive seen him go through some tough and adverse situations, and his work ethic is what modeled my own.

I played lacrosse, I wrestled, played baseball, and ran track.

I feel what separates me from others is my ability to pass rush effectively from multiple positions across the defensive line. I have played all of them While here and had success.

I look for tells, from the offense for run /pass keys. I also look for how and offensive linemen sets, his hands and feet, where they like to slide, how deep the quarterback drops, where he holds the ball, just things like that.

Toughest player I ever faced was the offensive tackle from West Texas my freshman year. I don’t remember his name but he was a K State transfer and the largest human I had ever seen coming fresh out of high school. He made me a lot better that day.

This is kind of a tough question because it’s not something that I think of often. I would say that someone I at least try to emulate is Justin Houston, because of how relentless he is, especially in the pass rush.

The biggest obstacle I had to Overcome was my parents divorce. It was hard as a young kid constantly going back and forth and dealing with all that comes with a divorce.

My biggest weakness is probably my speed at setting the edge on runs. I know that I do it, but I also know that I could do it faster and better.

I would say that I am an extremely coachable player, I make plays consistently, and I do my assigned job, and I do it well.

If I could have dinner with any three people it would be: Aristotle, Alexander the Great, and Teddy Roosevelt

With my first paycheck id buy a dog bed that my dog Couldn’t chew through. Other than that id try to finish fixing up my jeep.