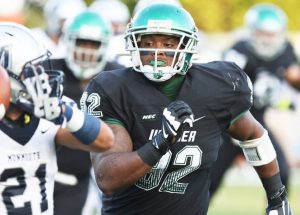 Wagner College has a stud in Mike Mentor, and right now he is dominating the FCS

My name is Mike Mentor

I play at Wagner College

I am from North Bergen, New Jersey

Yes, In high school I played outside linebacker and running back.

My ability to convert speed into power

Tearing my ACL and having blood clots in my knee in 2008. I could not play for two seasons and I overcame it by doing rehab and lifting weights until I couldn’t anymore and being patient, also going to Fork Union Military Academy in 2011 for 10 months. 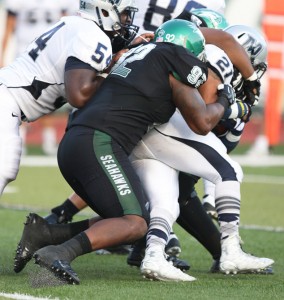 Yes, I put my eye black on the same time every week

Just getting noticed in the media versus the other big school name guys.

Biggest strength is my motor and will to work every day

I work tirelessly until I reach my goals for this team. I will lock into detail in my position and surprise people with my athletic ability and strength on making plays.

My favorite player growing up was Warren Sapp