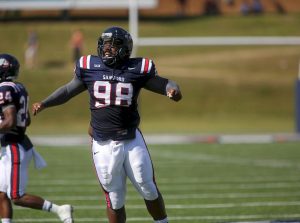 I had the chance to work with Habitat for Humanity, while I was at Tulane University and it really changed my perspective on things seeing the impact our work had on a family in need of assistance.

I’m currently in International Law as a part of my Public Administration major. It forces you to think differently it’s very challenging.

My father is my role model, he’s done amazing job providing for our family and is very strong in his Faith walk which something I’m actively striving to achieve.

I’ve played almost every major sport at some point in my life, I was apart of the basketball and track team as well as football  in high school.

I was an All-State Linebacker in High School, I also currently play Fullback in goal line and short yardage situations at Samford.

I think my Strength and Quickness at the position is what sets me apart. When my 725lb pound squat video went Viral I think a lot more people payed attention

I look for tendencies like lineman stances and try to get an indication on run/ pass before the play starts.

I’d say BJ Raji or Brandon Mebane they both are awesome run stoppers and push the pocket in passing situations.

My biggest obstacle I’ve encountered was after I became academically ineligible at Tulane my freshmen year, I not only had to prove to my family that I could rebound and do well in college but also proving to the Samford staff that I could not only produce on the field but also in the class room .

I normally listen to jazz music the morning before the games to prevent myself from getting too hyped up, that’s about it as far as a pregame routine. 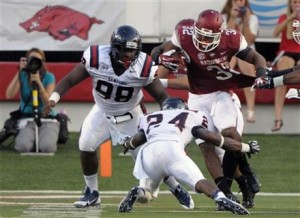 Coming from a FCS school I feel like I have to prove that I’m still capable of being dominate no matter the level of competition. So when we play bigger schools like Auburn or Louisville nothing should change about my game.

My biggest strength is ability to two gap in the run game and be disruptive, I think that plays a big role for our defense.

I’ve taken a lot of time during the off season working on my pass rush moves and finishing when I get back at QB level. Penetration and Disruption are good to have on film but sacks are better.

I would tell you that my love of the game would be my single selling point, I think that sticks out on my game film I really enjoy playing the game. If the NFL didn’t pay athletes I’d still be playing in some capacity.

My favorite player has always been Ray Lewis, I’ve always played LB up until my first year of college so he’s a guy I tried to emulate. With that being said I always cheered for the Ravens.

I would have dinner with Martin Luther King, Ray Lewis, Warren Buffett. Those three guys all have something different to offer as far as knowledge goes I would come away from that dinner with a lot of notes.

With my first paycheck I would put down a payment on an nice apartment near the facility. I’m not very materialistic