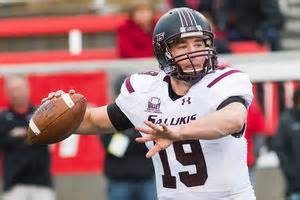 The coolest things I’ve done off the field include organizing a fundraiser for American Cancer Society at Cool Spoons which is a local Frozen Yogurt business. I’ve participated in the Ford Lake Frozen Leap in Ypsilanti, MI to raise money for local non-profits. I’ve also volunteered at the Special Olympics event held here every year at SIU.

The hardest class I ever had to take was Production Operations Management. I had to take the class over the summer and it was only offered online. I’m a visual and kinesthetic learner, so listening to audio lectures and trying to teach myself different forecasting methods and formulas was pretty challenging.

My role model would definitely be my older brother Anthony. Him and I have always been ridiculously competitive. Growing up, we played the same sports year round and he would always push me to be the best that I could be. He paved the way and let me follow in his footsteps. He was always there for me and was a perfect role model to look up to.

Growing up, I played hockey, baseball, and basketball in addition to football.

I didn’t play quarterback until high school. I played just about everything but quarterback growing up. I was usually on the defensive side of the ball as a linebacker or defensive line, but also played some offensive line and tight end.

I think my study skills separate me from others. I have a 3.85 GPA in school which shows I have a very strong work ethic and I’m a quick learner which transfers into the film room. Also, I’m a holder for extra points and field goals, so teams can get some special teams use out of me.

When breaking down film, first I watch full games. I look for base coverages and get a feel for their personnel. Next, I watch cutups of situations, whether it be 1st and 10, 3rd and long, red zone, etc. to get an idea of what coverages and pressures to expect in such situations. Then I watch formation cutups, and based on our offensive game-plan, I visualize our plays against their defensive looks for each formation.

The toughest player I ever played against was when I was at Eastern Michigan. We played at Michigan State when Le’Veon Bell was the running back. He’s an unbelievable athlete, and I’m not surprised at all to see the success he’s having in Pittsburgh.

I would compare my style of play to Russell Wilson because when a throw isn’t there, I get outside of the pocket to extend the play or tuck the ball and get upfield to get whatever yards I can. 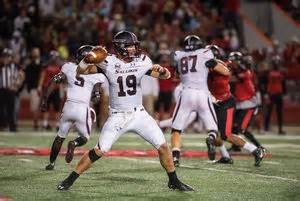 The biggest obstacle in my life was when I was at Eastern Michigan and one of my very good friends/teammates was shot and killed halfway through the season. The only way to overcome something like that was to stick together with my brothers on the team and remember him every time we step out on that field.

My only pre-game ritual is blasting country music in my room. I like to stay relaxed and loose before games.

The biggest obstacle I feel I have to overcome is finding a way to differentiate myself. I need to find a way to show that I can compete at a very high level and find a way to stick out from the other quarterbacks.

My biggest strengths are my study habits, my character, and my toughness.

I would say that I am 100% a team first player. I care about the team more than myself. Being a marketing major, I understand that I’m representing an entire organization, and being a quarterback I must hold myself to the highest standards. I have experience holding for field goals, so I am willing and able to contribute to special teams. I am a student of the game and take advantage of every opportunity to learn and grow as a player.

I would definitely rescue a puppy from an animal shelter. I have a huge soft spot for dogs and those commercials get me every time.