I have went to the poorest city in America and did camps with FCA.

My Mom is my role model because she has overcome a lot in life and right now she’s battling lupus and that’s a big obstacle in her life but she is just strong lady and I’ve learned so much from her.

I played Strong Safety and TE in HS

I have strong hands and I’m physical which creates good blocks.

I look for the little things such as a corners alignment to a certain personnel or how good is there back peddle. Etc

I have faced some good players but none that really stand out. I would say Deondre Hall from UNI he was pretty good.

I would compare myself to Anquan Boldin or Plexico Burress because I am a possession WR with strong hands. 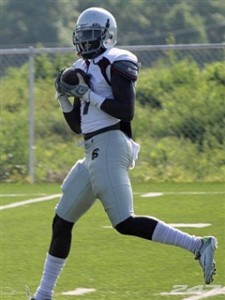 My parents split up and I moved with my Mom to Omaha which messed me up because I was a daddies boy and I was basically away from him for two years barely being able to see or talk to him. I overcame those two years by playing football and visiting him every now and then, and then he eventually ended up moving to Omaha.

I go to the end zone and get on one knee right in front of the crowd and just thank GOD for the opportunity.

Play with a chip on my shoulder but far as size I’m as bigger then most big school WR’s. Coaching is probably different I don’t know as much an FBS wide receiver does.

I would say I have overcome a lot in my life and I feel like I belong here in the NFL.

My Grandpa I never got to meet, Jesus, Ray Lewis.

Probably wouldn’t buy nothing honestly, save it. If I did I would give 10% to the church and get something that is needed.