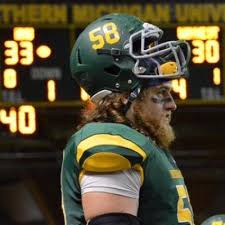 One of the coolest things I have done here in Marquette is work with students with exceptionalities such as autism and down syndrome. At home in Green Bay, Wisconsin I worked a development for young boys called BOLD Camp. Here we taught kids how to become young men.

The hardest class I have ever had to take was my education statistics and probability class. It was heavily loaded with math and I had more projects and homework in this one class than any other.

My role model is my younger brother Kevin. He is no longer able to play football because of a back injury he sustained while playing football in high school. He also played an entire season on a broken leg and his toughness and resilience is something I look up to. He has dealt with things no kid should ever have to deal with and had to make the decision to stop playing football which makes me play for him. I write his name on my wrists for every football game.

I believe my intelligence, body control, and determination set me apart from the others. I put in the work in the film room to make sure I am the smartest person on the field.  Having played every position on the offensive line also helps this. I have great body control and work on improving it every day. Being from a small school and being told I was “too small” keeps me determined.

When breaking down film on myself I look for what I can improve, what I did well, and what I can do that will put me in the best position to win. When breaking down film on opponents I look for why they do what they do: How he plays versus run, his favorite pass rush moves, his “go to” move when its 3rd and long and he needs to win, his strengths, and his weaknesses.

The toughest player I have ever gone against was a DT from Ashland University named Jamie Meder. He is currently playing for the Cleveland Browns.

Corey Linsley. I have watched him since Ohio State and watch him now as a Packer. He is undersized but still dominates using his strength, leverage, and intelligence. 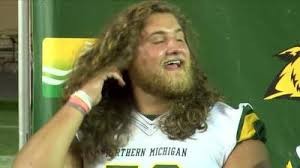 The biggest thing I have had to overcome was watching my little brother have to make the decision to quit football. I had to go from watching him love the game and look up to me because I played football and then I had to watch him get hurt and quit football. All he did was work hard and give it his all and the game was taken from him.

I have to listen to Drake’s Take Care album the night before a game. The day of I have to read a letter my younger brother wrote for me when he was a freshman in high school.

I think the biggest thing I have to overcome is exposure. I don’t have the televised games and news teams reporting on my games. Also the level of competition is different than those of a player at a big time D1 school.

My biggest strength is my mind. I have the attitude and prepare in a way which puts me above everyone else on the field.

My biggest weakness would be height/length. I do not have the stature of a “typical” offensive linemen.

My favorite player when I was young was Jeremy Shockey but my favorite team is the Green Bay Packers.

I’m a funny guy so I would have to have Chris Farley, Kevin Hart, and my Grandpa Steuck. My grandpa died when I was young and I don’t remember much about him however, my mom and dad tell me he was my best friend.

I would buy my mom and dad something that they have always wanted. They have done so much for me over the years and I could never thank them enough.