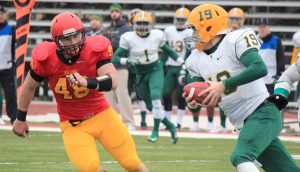 Being in the education program I did observation hours at the local middle school last fall and got to help out with a bunch of the kids, many of whom were big Ferris football fans.

I am from Greenville, Michigan.  A small town about 45 minutes north of Grand Rapids.

My biggest role models have always been my parents.  They both instilled great values in me that they practice everyday.  They both work incredibly hard and show an immense amount of support in everything that me and my siblings do.

In high school I played linebacker and tight end. Then at the end of my first year at Ferris I switched to defensive end.  Which I played all the way through last year, then in this off season I switched to primarily defensive tackle. 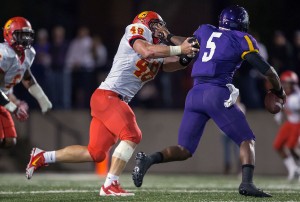 I think with me switching from defensive end to now playing 3 tech I am more athletic than the average 3 tech and also I have better pass rush moves than most interior defensive lineman.

When I break down I usually look for any sort of tendencies that I will be able to pick up in a game.  So it might be a lineman’s splits, it might be how far offset the back it, it might be if they are always man to the back or vice versa.  Basically I look for anything that will help me narrow down what the play is before the snap.  If I can tell what play it is pre snap that gives me a huge advantage.  I also obviously look at how every lineman’s pass sets are.  Meaning whether they set deep or short, do they give up the inside move, do they show their hands early, are they susceptible to speed or bull rushes? Anything that will give me an advantage.

In my redshirt sophomore year and my first start ever we traveled to Fargo and played North Dakota State.  I played against Billy Turner who ended up being a 3rd round pick after the season.  I didn’t play bad, but it was definitely a reality check to start my career, and made me realize I had a lot to work on.

I don’t really know of any players that I can compare myself directly to, but two players I love watching play three tech are Gerald McCoy and Aaron Donald, because they’re both extremely quick and powerful at the same time

Usually I go out to the field as soon as we get there and I’ll throw the ball around, kick some punts and field goals just for fun so I stay calm and don’t get to excited for the game.

I feel like I have to prove to everyone that I can play with players who are from the bigger schools.

I would say my versatility is my biggest strength.  I am able to play a number of different positions on the field.  So far this year I have had plays at nose guard, 3 technique, defensive end, and middle linebacker.

With switching to defensive tackle I would say my biggest weakness that I’ve been trying to work on is my recognition of down blocks and double teams.

I would say that I am a player that is going to do exactly what a coach asks of me.  I will play any position or on any special teams unit and I will work as hard as possible to be the best player that I can be.

Growing up in Michigan I have been a Lions fan my whole life as painful as it has been at times, but a player I really liked watching play was Javon Kearse.

I think I would choose Barry Sanders, Shaq, and The Rock.

I don’t think I’d do anything too drastic. I’d probably just take my family out to a nice dinner to celebrate.