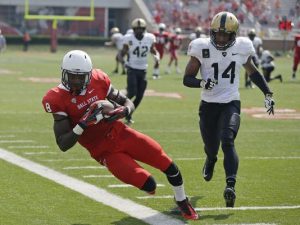 Ball State wide receiver Jordan Williams has an NFL pedigree, He is a special player

Coolest thing I have done to give back was go do landscaping for the families in our college community.

The hardest class I have ever taken was my finance 445 class, which focused on Financial Statement Analysis

Brandon Marshall has been a good role model for me, He has had some good advice for me in the past and has done a lot of things to give back, while also producing on the field.

Being able to separate on routes, play physical, and go attack the ball.

The type of techniques the corner plays, Defensive calls in certain situations, I look at how the safeties aligns in certain sets, and corners feet and hips

One of the toughest corners I have gone against was Desmond King at Iowa.

I would compare my game to Dez Bryant. His physicality, the way he attacks the ball, and passion for the game are some things I try to focus on.

One major obstacle was when my mom had thyroid cancer. That whole time period it was hard to focus and stay positive about everything as far as school, sports, and life in general.

I always take a long hot shower and visualize making plays in the game. Afterwards I get a quick stretching session in.

Being able to get your name out there, and obviously working with the things you have. We aren’t as fortunate as the bigger schools as far as having an indoor facility or getting a lot of gear. Our program doesn’t have the money that those schools have to be able to provide the things they do and we aren’t on national TV every week. 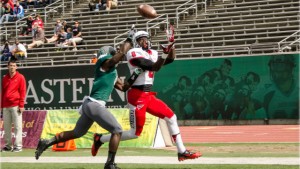 Physical play, and ability to be a deep threat.

I would say I am a hard worker who takes criticism and will use it to get better. I also am not the best football player I can be yet and I have a lot of room for improvement. I can bring a lot to the table as far as being an asset to the team, and I will stay out of trouble.

My favorite player was Terrell Owens and the Eagles team back when they had McNabb, Westbrook, and Dawkins.

Move my mom into another house or apartment.