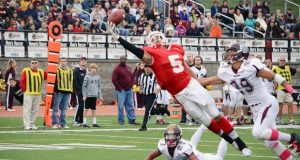 East Stroudsburg wide out Jon Schnaars is a Diamond in the Rough. People are overlooking him badly

We have this thing we call “Breakfast with the Warriors” before our scrimmage in camp every year. We have all the local grade schools’ football teams come to our café and they are paired with a player. We then eat breakfast with them and take them to the field where they join us in our stretches and drills. It is great to see how much fun the have and their excitement to do our drills.

What is the hardest college class you have ever had to take?

My hometown is Harrisburg, Pa

My father because he is the bravest and hardest working person I know. Anything life has thrown at him he has pushed through and excelled.

In high school I played cornerback and safety while also being a punt returner.

Well I will never let anybody out work me, I have had people tell me I could not play at the next level since grammar school and that has made me have a chip on my shoulder when I play and train. Also I believe my body control near the sidelines and back of the end zone separate me because I am always aware of where I am on the field without having to take my eyes off of the ball. I believe that when the ball is in the air, it is mine.

I always look how aggressive the defender is. If they initiate contact or back off, because I am a very physical receiver so that can play into my hands. Also, I look to see the technique they play on certain coverages and for any tips that will give me a heads up on what they are trying to do to me. Finally, I look to see how they play the ball in the air, whether or not they play through my hands, keep their eyes on me, or take chances for an attempted interception.

Who is the toughest player you have ever faced? 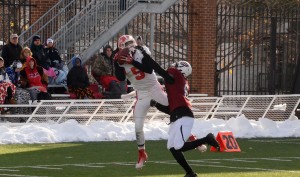 I would have to say Steve Smith from Baltimore. Obviously we aren’t the same size, however we both play receiver with a defensive mindset, whether its blocked for our teammates, the run after the catch, or when the ball is in the air and we jump up at the highest point grab it and pull it down. No ball that is thrown our way is ever uncatchable in our eyes, its all out every time, every play.

What was the biggest obstacle in your life you have had to overcome, and how did you overcome it?

I would have to say my freshman year of college when both of my grandparents passed away in the same year. It was my first time being away from my family, and I was trying to adjust to the college game and my head just wasn’t right. Thankfully for me my parents were very supportive and so were my teammates and coaches even though I had just met them. The love I felt helped me to push through the tough time and come out of it a better person and even more determined.

I listen to the same songs before I go out every game and I kiss my crucifix 2 times after the team prayer to pay tribute to my grandparents.

I think the biggest thing is that people do not believe I go against good enough competition game in and game out as the big schools around the nation. It is hard to get exposure and noticed from smaller schools so I just try every day to be great and improve in all aspects of the game

My quickness in my footwork

You wont meet another person who will outwork me.

Randy Moss and I was a Vikings fan initially when he was there and switched to the Raiders when he got traded. Been a silver and black fan ever since.

If you could have dinner with three people or alive, who would you choose.

A brand new house for my parents