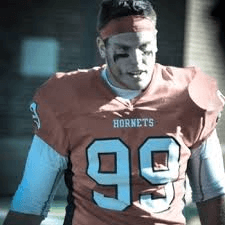 My junior year of high school I went on a missions trip to Guatemala. It really made me realize how blessed I am and appreciate the opportunities given to me.

My role models are my parents. They both have worked very hard their whole life and dealt with adversity in order to provide me with the things i need to be able to play football and go to school.

I grew up wrestling and played baseball

What separates me the most is that I have a non-stop motor and fire off as hard as I can every snap. I also have the endurance to do so on every snap of the game and never come out. I also am very good with my hands and have a huge variety of pass rushing moves.

When I watch film i look at the tackles pass sets, how and when they shoot their hands, and if they lean at all at the point of attack.

My sophomore year I faced a tackle named Will Ferrill from Hampden-Sydney. He was a two time All-American and being scouted for the NFL. He was a tough challenge and got me a few times but I had my fair share of wins as well.

JJ Watt. He has a non-stop motor and is relentless in his pass rush. Also Connor Barwin, because he is aggressive with his hands and explosive off the edge.

My junior year of high school I was sidelined with a back injury and they had originally said my football career was over. However I saw multiple doctors, did physical therapy, and strengthened my back and was able to return the following year with no issues.

Every morning of game day when I wake up I do a huge stretch and scream I AM ALIVE!!! I know it sounds weird and my roommates hate it but it wakes me up and gets me ready for they day. Also after the coin toss I go to the end of the sideline and say a prayer thanking God for giving me the opportunity to be playing football.

The biggest obstacle as a small school player is getting recognition. Many people will say that I only look so good on film because I’m not going against any good competition.

My biggest strengths are my explosiveness off the ball, my aggressive hands, and my non-stop motor.

My biggest weakness is that sometimes I will think too much, instead of just playing

I’m going to outwork my competition both on and off the field. Also, since I am coming from a small school I haven’t had the resources Division 1 players have had, so I have a lot more potential for growth, both physically and in my technique.

When I was young I was a Buccaneers fan and loved watching Warren Sapp and Derrick Brooks.

I’d buy a Hyperbaric Chamber, I hear they do wonders for muscle recovery.