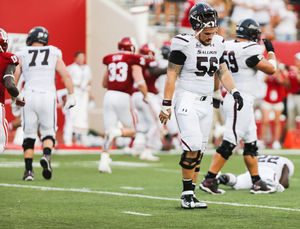 Souper Bowl for Caring is an event we work and organize here at SIU during Super Bowl weekend. We collect donations for the homeless shelter.

Statistics, not too great with math classes.

I’d have to say my dad, he has molded me into the man I am today. As well as fueled my passion for football, he definitely has been my number one fan.

Basketball, Baseball, Track and I wrestled.

My quickness off the ball, my field awareness, and my explosion. I also feel my knowledge of the game keeps me a step ahead of everyone.

At my previous school I played against Jamie Collins everyday in practice, so I would have to say him.

I try and mold my play after Alex Mack. He plays with great pad level and is very quick as well as always takes the right angle on the defender. He is a pro bowl center, so he is an ideal player.

Being told I was too short or too small in high school. I had multiple schools throw me to the side for that fact, so I worked as hard as I could to develop my size and speed so that colleges would be interested.

I always call my best friend, Manrey Saint-Amour and pray with him. He used to play center at Georgia Southern and is now a team chaplain with them.

I feel teams will want to see that I can compete against competition day in and day out. I feel more so now a days, small schools aren’t as overshadowed like previous years.

Pad level at times as well as hand placement can be a weakness.

If you want someone that will lay it all on the line and play their role on the team every single day then I’m your guy. I will do whatever it takes to help my team succeed, and there is no exception to that.

David Pollack was my favorite player growing up and the Jacksonville Jaguars were my team.

My Gidu, My Dad, and Herschel Walker

Pay all of my Situ’s bills and whatever she wanted.