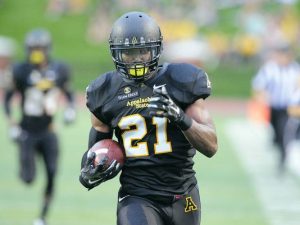 Doug Middleton is a warrior for App. State and he has NFL teams raving about him

Mentoring a kid from my Sophomore year till now and watching him grown up into a successful teenager.

My parents, because they sacrificed their own wants and needs to make sure me and my siblings were successful

My speed, my intelligence, and my versatility.

Any tendencies that can help me play faster, whether it is certain formations or alignments. Also to study my opponent and know what they like to do in certain situations. 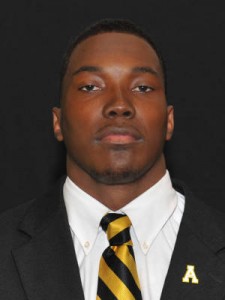 Antrel Rolle, a great leader and a very versatile player. Came in the league as a corner and currently plays both safeties, and also has the ability to line up in the box.

My biggest obstacle was getting injured against ECU my sophomore and being out for the entire season, I just prayed a lot, worked as hard as I could and did whatever it took to get back on the field.

Pray with my dad and grandma, read a scripture during Pre-game, and pray once I hit the field in the corner of the end zone

Just being able to show that I’m just as good as the players that have more exposure, and being able to prove that I can play with the same productivity against a higher level of competition

My speed, and my versatility

My expectations on myself

My name is Douglas Middleton, I’ve played at Appalachian State University for the past 5 seasons. I love the game of football, and would love to have the opportunity to be a part of your franchise. I love to win, lead, and have fun. I am a versatile defensive back that can line up at Corner or any Safety position. I love playing special teams, and take this game very serious. I love to compete, and I believe that if you want something you have to go out there and earn it.

Favorite NFL player growing up was Ladainian Tomlinson and Champ Bailey. My favorite team was the 49ers growing up but it is currently the Jets since high school.

I would save It, and just get myself in a position to be financially stable once my playing career is over