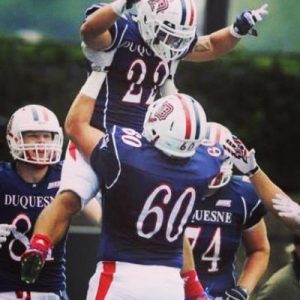 Working with the Josh Gibson Foundation, assisting in the academic and athletic development of young kids in Pittsburgh

My dad, because of his unbelievable work ethic and willingness to succeed and provide for my family

I played baseball, basketball and wrestled while in elementary school and eventually ended up just playing football and lacrosse in high school

The stance of the defensive linemen to see if they are giving any moves away in the pre-snap, and how they react once they are engaged with an offensive lineman

Justin Pugh, he was an undersized tackle coming out of college and made the transition to guard. When looking at his college film I see a lot of similarities in our style of play

I played my entire junior and senior high school seasons with a torn labrum in my shoulder because I did not want to take any time off. Having to deal with the pain was tough, but knowing that I could still compete to fulfill my dream of earning a football scholarship kept me going.

The hardest thing has been getting noticed. It’s tough to be in the shadow of players from bigger schools sometimes

I would say my biggest strength is my athleticism and footwork
What is your biggest weakness?

I am willing to do whatever it takes to succeed. Coming from a small school has taught me the true value of working hard to get where others are

I was and am a fan of the Philadelphia Eagles because they are my hometown team, but my favorite player was Peyton Manning because of his work ethic and understanding of the game