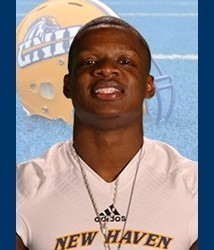 Courtney Moshood is an athletic wide out, with stupid speed

I’ve workout and mentor with the youth four times a week at Goulds Park in South Florida. Football down south is not a sport, it’s a lifestyle and younger kids look up to us for guidance. To do anything less then that would be a dishonor.

My role model is my parents because they’ve shown me what it means to preserve and be humble at all times.

Yes. I have also played CB.

What separates me from others would be my speed. It allows me to take the top off the coverage. I’m more than just a vertical threat. I possess big-time playmaking ability and I am also elusive in the open field.

I look for any tendencies in the secondary, such as tightness, lack of technique and impatient style of play.

It would be Al-Hajj Shabazz during my sophomore year of college.

John Brown because he is a speedy compact WR with big play capability from a D2 program like myself.

Being a young father and having to balance responsibilities between being a student-athlete and a father to my son. The hardest part is raising him from a distance. I really haven’t overcome it. I know by graduating college I can lay down a firm foundation for his future.

Listen to Travis Scott and saying a prayer at the goal post.

Just being able to show GMs that I am just as talented as other prospects, and if given the opportunity I can not only compete but also thrive against a higher level of competition.

My search for perfection.

My name is Courtney Moshood from the University of New Haven. I love the game of football and would be honored to have the opportunity to be apart of your organization. I am a home run WR that can take the top off a defense for the big play and I can take the hitch the distance. I can also line up in the slot or outside. I love playing Gunner, KOR, PR, and any type of special teams. Football is very important to me and I take it serious. I believe that any man that wants more then an opportunity is ungrateful.

Who were your favorite player and/or NFL team growing up?

Put Money aside for my son’s college tuition and the rest is going into savings for a life after football.