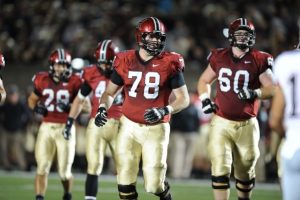 I went to Clarence R. Edwards Middle School in Boston every week one semester to help underprivileged kids with their classes, hung out with them at recess, and provided a role model for them.

Econ 1420 – American Economic Policy. It was taught by and economic all-star cast including Marty Feldstein and Larry Summers. The workload was not bad but it makes one realize the incredible scope of decisions economists and politicians have to make regarding policy, and that there are always an incredible number of variables that are affected by each small decision.

Peyton Manning. Growing up a Colts fan in Peyton’s heyday, seeing him conduct himself in such a professional and congenial manner for so many years, watching his funny commercials, and seeing the positive impact he had on the community of Indianapolis, I will always consider him a role model of mine.

Nothing other than offensive line, unfortunately. I have great hands, though, I should have been a tight end.

I think it is my athleticism, foot speed, and tenacity through the whistle.

I usually try to see one thing I struggled with the day before, and focus on making that thing better at practice that day.

A former teammate and current NFL player, Zack Hodges. He is an athletic freak, especially for the Ivy League. Practicing against him every day helped make me the player I am today.

I like watching Joe Reitz, an offensive lineman for the Colts. He is a hometown guy and I have met him before. I think we have similar body type, he was a basketball player too, and he was also a smaller school guy. He has stepped in and played a lot of positions well for the Colts. 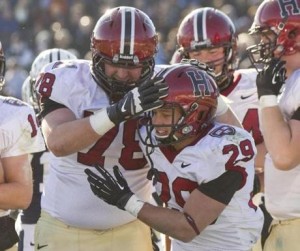 I have been fortunate and blessed to have had a stable home life and an ultra-supportive family and great friends in my life, so besides various injuries along the way I have not had to deal with too many obstacles outside of football.

A pregame shower is a must.

The biggest obstacle I feel I have to overcome is competition. The Ivy League has some fantastic football players, but most scouts seem to not consider it to be as top-notch competition.

I think my biggest strength is my work ethic and personality.

My current biggest weakness is my strength.  I need to get stronger to play in the NFL.

I am a very well-rounded individual and have the athletic tools to be an NFL player, and will work as hard as possible to achieve that goal.

I have always been a big Colts fan.

A new drum set. Mine current one has taken a beating over the years.