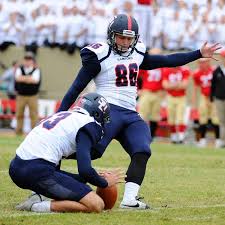 Samford kicker Anthony Pistelli has a strong leg, and could be a good kicker in the NFL

Probably physics, just because I’ve never been great with math.

I’ve been fortunate enough to have many great people in my life that I look up to, and I could never choose just one, but my parents definitely top the list. They’re my biggest fans and I’d never be where I am without them – I can only hope to be half the person and parent that they are.

I grew up playing only soccer – it was my first love. In fact, I didn’t play football until my senior year of high school and I even played soccer my freshman year of college at Thomas University before starting my football career at Valdosta State.

I did not, but I like to tell people that I would have been a pretty good running back.

I pride myself on my accuracy. I’m not the kicker who’s going to wow you with a big leg, but I split the posts when it counts.

I don’t watch a ton, but I do watch film on the returners every week and I always watch my film from practice every day.

That’s got to be Malcolm Butler from West Alabama. He plays for the Patriots now and made the interception in the Super Bowl to end the game against Seattle.

Probably Nick Novak of the Houston Texans. Our kicking style is very similar, and even though he doesn’t have the biggest leg in the league, he’s managed a long and successful career. 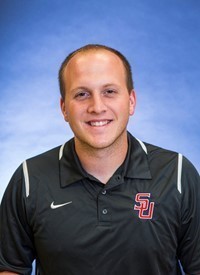 I think going into my sophomore year, I was named the starter early in camp, but fell into a slump and ended up losing my spot to a senior before the first game. I won the starting job back back the second game and was able to keep it for the rest of the season. I remember thinking that I wasn’t good enough and I even had thoughts about quitting football altogether. With the love and support of my family, friends, and teammates, I put my head down and kept working and saw my way through it. I couldn’t have made it through that alone.

I’m not too ritualistic; I just do whatever I feel like I need to do to get myself ready for the game on that day.

It’s definitely much more difficult to get exposure at smaller schools. Scouts do come through, but not as much as at the big schools. Also, just not having the money and resources of the bigger schools. I can remember 13 hour bus rides to games thinking about how some big schools would have flown.

I think my ability to persevere when times get tough and being able to stay positive when I’m not at my best. I’m also very coachable.

I’m a perfectionist. I shoot for the stars and anything that falls short simply isn’t good enough. Sometimes it’s hard for me to just call it quits for the day. I’m always the one saying “one more ball.”

I’m humble, I’m coachable, I’m a leader, I take pride in my team and being a teammate, and I’m a motivator. I’m happy to do anything and everything it takes to help my team win.

My favorite NFL team is the Atlanta Falcons, mainly because I’m from Georgia, but I loved watching Mike Vick when I was growing up. My favorite kicker is Graham Gano of the Carolina Panthers.

I’m a little eclectic, so that’s tough. But I gotta go with Steven Gerrard, Salvador Dali, and Johnny Cash.

I would immediately call and ask my dad how I should invest it. I don’t want to blow it all on toys!