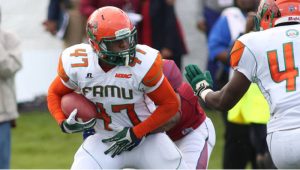 NFL Play 60 Event with the MEAC conference, organized a team clothes drive for the homeless shelter and a back to school drive collecting pens, pencils, notebooks etc for local elementary schools. I believed athletes are blessed to be in a special position to have influence and ability to affect the community.

My father, first because he is a God fearing, Christian man, and has accomplished everything in life that I want to accomplish, play football at the highest level and build a charity for young males to better themselves.

Athleticism, Speed, coverage skills, playing in space, getting my hands on the ball.

Formations, Personnel, Down and Distance, Envision myself making plays as they run their offense and I watch it on film.

Both my brothers, one is 6’6 shooting guard at Cleveland state, other 300lb DT in high school. They have been on the weights lately so they try and team up on me. Toughest football player, Greg Mcghee QB Howard University, he game resembles young Michael Vick with the ability to run and has a cannon for an arm.

Ray Lewis because of passion and influence and Bobby Wagner because of his ability to play sideline to sideline.

Death of my grandparents. My grandmother was 103 so it felt like she was going to live forever but I got through it by trusting God knowing they were in a better place.

Prayer and get a good warm up with my training mask to strengthen my lunges. Before we come out as a team I just like to walk on the field and envision plays I see myself making. 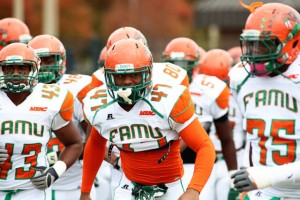 Being Underrated and some of the smaller university don’t have the same resources that bigger universities have but I’ve embraced the challenge of not having the convenience other players have. For instance having to go buy my own ice and take ice baths in my apartment.

Need to consistently be more physical in the box

I am a passionate football player who loves the game, works hard, has pride in doing the right thing, and positively affects teammates, most importantly a play maker.

Dad playing for the Steelers definitely the Home Team was the favorite team.

Honestly I wouldn’t buy anything. I would pay my tithes and save it. God willing, If received numerous I promised myself I would give money to my church that I grew up in as they raise money to renovate the church.