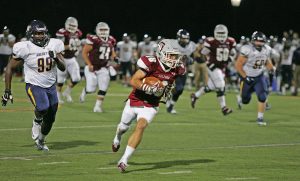 The coolest thing I have been able to do off the field was based on my goal in life, which is to help other athletes perform to their potential. I have had the opportunity over the past two years during breaks from school, to work as an intern assistant coach with my former high school, Davie County High School in Mocksville, NC. I had never experienced the feeling I got when coaching, because I was able to help high school football players excel in their passion on the field. No better feeling than doing for others.

My parents, because they raised me to be the man I am today. They have sacrificed time, money, and all sorts of things to ensure my shot at success.

I played basketball and was a hurdler in track & field.

I played quarterback up until my freshman year at Guilford, and a little bit of corner in high school.

My speed, knowledge of the game, reliability, and versatility. I have been consistently timed running a 4.4 40 yard dash. That has helped make me a deep threat that stretches the field and helps open up more underneath game in our offense. I have learned from all of my coaches in the past about defenses; how to find open areas in different types of zones, how to manipulate zone schemes to get open, and simply being able to read defenses as a whole and knowing where to be in my role as a wide receiver. Also, a wide receiver needs sure hands and to be trusted by his quarterback. I’m able to build a connection with a quarterback quicker than most, considering I played the position. Instead of playing one position at Guilford, I play all 4 of our spread offense receiver positions. I can play inside, outside, or come out of the backfield and be effective by running crisp routes in all positions. 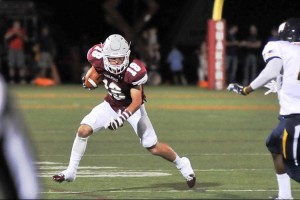 As a WR, Free Safety Satiir Stevenson is the toughest player I’ve faced. 2x D3Football.com All-American that I practiced against daily at Guilford. He taught me a lot about the importance of winning 1 on 1 matchups.

Desean Jackson. Although he has a small frame, he’s never let it stop him. He is able to use his elite speed and playmaking ability from all positions at WR. He is also known as being a deep threat guy that you do not want behind your defense.

I’m a little more superstitious than I’d like to admit. I have a teammate of mine tape my wrists before every game. Before warm-ups, our skill guys throw some routes. When every receiver and quarterback is done, I catch a deep post from Matt Pawlowski, our starting quarterback, and we head into the locker room with one another. Then, when the team comes out to the field, I look into the sky, smile, and thank God for blessing me so much.

I need to prove that I am not producing or successful because my competition is DIII level competition. I will not receive much exposure when compared to an FBS or FCS guy. Those obstacles make scouts doubtful of true ability. So continuing to dominate the given competition is the first way I’ll overcome these obstacles.

My speed and versatility, because my game as a wide receiver starts with speed. If I can run past, or away, from a defensive back, it is easier for me to make a play.

My blocking ability, because in our offense, I am not very often a run blocker. I have improved drastically in that part of my game in the past years.

“My name is Adam Smith, wide receiver from Guilford College.There are 32 teams in the NFL and 9 teams in the CFL. I just need one opportunity and I’d love for that opportunity to be with your franchise. I have the ability to play anywhere on the field in order to help the offense be successful. I understand defenses and the game more than the average receiver. I’ll play fast and make plays. I do not make costly mistakes on or off the field, like dropping balls or getting into trouble. I love to win and will work to help my team do that.”

My favorite player growing up was Tom Brady. Watching him pick apart defenses is special.

If you could have dinner with three people dead or alive, who would you choose?
My granddad, Kobe Bryant, and Jesus Christ.
With your first NFL paycheck what would you buy?

I would not blow my first paycheck, I would save it. My dad always told me, “Your football career could end in one play.” So I’d save my money to help support my family and I after football is over.