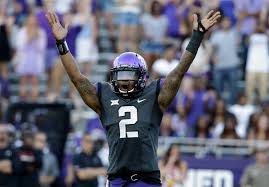 West Virginia has an underrated secondary, full of NFL prospects. Worley vs Shepherd could be worth the price of admission. The 2 safeties have no problem knocking someone’s head off. Something to watch is the continued improvement of Karl Joseph in coverage.

The TCU trio faces a tough Texas D. Boykin and Doctson are a lethal combination on the deep ball and Green is a shifty all purpose back who can take it to the house.

The matchup to watch is Notre Dame deep threat Will Fuller vs Clemson’s emerging lockdown corner MacKenzie Alexander. Alexander had a few issues in coverage last week but Louisville was unable to make him pay. ND will provide a real test.

In what will most likely be an offensive shootout Baylor will be hoping DL Andrew Billings and Shawn Oakman can disrupt Texas Techs passing game and be the difference.

In a battle of running games Alabama’s stout group of DL Ashawn Robinson, Jonathan Allen, and Jarran Reed will look to clog the run lanes which will then be filled by hard hitting LBs Reggie Ragland, Ruben Foster, and Denzel Deval. Stopping Georgia’s deep stable of RBs.

In what could be one if the best individual matchups of the year Florida’s elite cornerback Vernon Hargreaves looks to stop Ole Miss WR Laquon Treadwell. Treadwell will struggle to separate from Hargreaves on the ground but where he can win is by using his size and excellent ability at the catch point.

Texas A&M’s depth at the WR position led by the steady Josh Reynolds & physical Ricky Seals-Jones face off against Mississippi St. CBs the athletic Will Redmond & feisty Taveze Calhoun. The Mississippi St. CBs will also be tested by explosive freshman Christian Kirk who may be the best player in this whole game.