Colts GM Ryan Grigson maybe on the hot seat; Owner had heated conversation with him 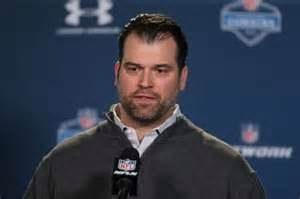 Everyone is thinking that Chuck Pagano is likely the one that is going to get the boot after the season, but that might not be the case.  According to the Indianapolis Star there was a heated conversation between Colts owner Jim Irsay and General Manager Ryan Grigson in the team’s locker room after yesterday’s 27-21 loss to the Saints.

Many feel that Grigson will try to fire Pagano to save his name, but Pagano was not the one that brought in a bunch of expensive old free agents, who are underperforming.  That was GM Ryan Grigson.

I would not be surprised to see some changes coming soon around the NFL, because Ryan Grigson is just one of many who have not helped their team succeed.