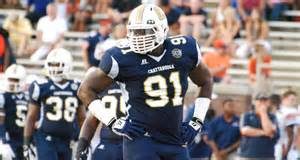 Martin Wallace played college football at Temple, and was originally signed as an undrafted free agent by the Browns. He has also played for the Panthers.

Lyn played college football at the Syracuse. Lyn signed with the Indianapolis Colts as an undrafted free agent in 2014

Daxton Swanson is a small school cornerback from Sam Houston State. He has spent time with the Colts, 49ers and Patriots.