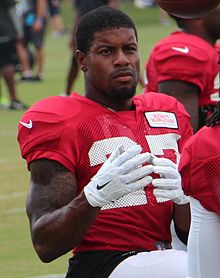 This week the Chicago Bears released Damontre Hurst, and now they seem to be looking for a replacement. According to Aaron Wilson of the National Football Post the Bears brought in defensive backs Ri’Shard Anderson, Robert McClain, Brandian Ross, and Pierre Warren for workouts this week.

McClain was a seventh round draft pick of the Carolina Panthers. He was a cornerback, punt returner, and kick returner with the University of Connecticut Huskies.

Pierre Warren played college football at Jacksonville State University. He has been a member of the New Orleans Saints and Minnesota Vikings.

Brandian Ross was originally signed by the Green Bay Packers as an undrafted free agent in 2011, and by the Oakland Raiders in 2012.

Ri’shard Anderson played college football at Syracuse. Anderson was a member of a senior class that won three bowl games in four years, and spent time with the Titans.