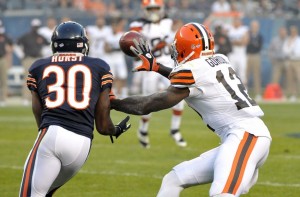 Demontre Hurst has been signed to the Bears active roster

The Chicago Bears announced Wednesday that they’ve promoted DB Demontre Hurst to their active roster and replaced him on their practice squad with OL Ryan Seymour.

Hurst, 24, re-signed with the Bears as an exclusive free agent back in February.