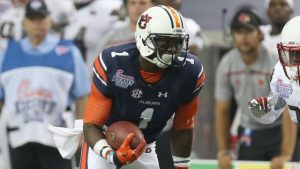 Auburn WR Duke Williams could be in trouble

D’haquille “Duke” Williams punched two security guards, a bartender assistant and another unidentified patron of a bar in Auburn following the football team’s win over San Jose State, according to AL.com.

According to the witness, the incident was sparked when a member of Williams’ party was kicked out of Skybar for wearing sunglasses inside, a violation of the bar’s dress code policy. Williams, who the witness said appeared intoxicated, attempted to get his friend back into the bar using his local celebrity status only to be denied.

Police arrived at the scene Saturday after the incident and returned Monday, according to the witness, who said one of the victims wanted to press charges against Williams unless he was disciplined by the team.

Duke is considered one of the top players in the 2016 NFL Draft so this is huge news. If this report is true, then Duke Williams could have to answer many questions from NFL teams and personnel.