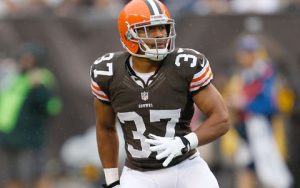 Josh Aubrey has been released by the Titans

Jim Wyatt of the Tennessean is reporting that the Tennessee Titans have waived DT Toby Johnson, S Josh Aubrey and TE Tevin Westbrook on Tuesday to get down to 75 players before today’s deadline.

Aubrey, 24, is a former Stephen F. Austin defensive back that had a great preseason with the Browns last season.  The team is now down to 75 players.