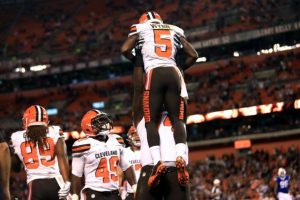 The Tennessee Titans are working out free agent wide receiver Shane Wynn.  Wynn was not selected during the 2015 NFL Draft, but shortly after the close of the seventh round it was announced that he had signed as a free agent with the Atlanta Falcons. He was claimed off waivers on June 19th by the Cleveland Browns. In his second pre-season game with the Browns, Wynn caught a 21-yard touchdown pass from Johnny Manziel. He was released by the Browns on August 31, 2015.

Adam Caplan reports that free agent WR Shane Wynn is scheduled to work out for the Titans on Tuesday.

Wynn is a little guy at 5’6, but he was a playmaker in college at the University of Indiana.