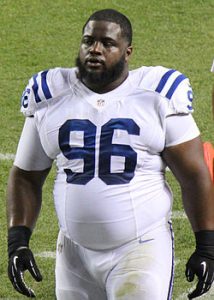 Chapman attended the University of Alabama and was drafted in the 5th round of the 2012 NFL Draft by the Indianapolis Colts. Chapman served as the backup to All-American Terrence Cody during the 2008 and 2009 seasons, and was regarded as one of the better nose guard prospects in his class.

Chapman appeared on the cover of the October 10, 2011 issue of Sports Illustrated after Alabama’s 38-10 victory over Florida