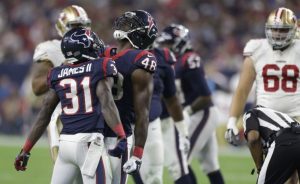 Charles James is on the trade block

Could the Houston Texans trade Hard Knocks hero Charles James?  It sure looks like the solid cornerback from Charleston Southern could be dealt.  Aaron Wilson reports that the Texans are exploring trade options for cornerbacks Charles James and Jumal Rolle.

The Texans have a tough decision because both of these guys showed up and showed out in the preseason.

Rolle, 25, appeared in 10 games last season, accumulating 19 total tackles, three interceptions, and four pass defenses. This preseason, Rolle has gathered 103 snaps and has had one interception.

James, 25, has not appeared in a regular season game since 2013. During that season, he played in 12 games for four total tackles.